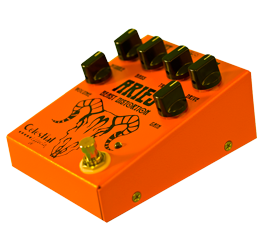 Not just any distortion, the Aries can be used as a boost, overdrive or distortion and with its three band EQ, this pedal gives you complete control of your dirt pedal needs.

But we didn't stop there. We then fed the gain stages into a three band EQ, giving the user control over the frequency response of the musical signal and finished the chain off with an FET gain stage. This FET gain stage corrects the attenuation (volume loss) from the EQ circuit and adds a tube like warmth to the effect.

Once you play through the Aries Beast Distortion you will fall in love with its versatility.

The Aries Beast Distortion can easily accomodate all styles of music.

The Aries Beast Distortion is a true bypass pedal and uses no buffers in its design.

There is very little noise filtering in the circuit which allows your guitar's entire signal to come through. The Aries Beast Distortion is extremely touch sensitive and responds beautifully to every nuance of your guitar playing.

Built like a tank using the best components available - including an all metal durable coated enclosure, CTS pots and Switchcraft jacks. Totally hand built, this pedal will keep you rocking for many years to come.

Celestial Effects recommends the use of a HIGH QUALITY 9 VDC regulated power adapter with the Aries Beast Distortion pedal like the Carl Martin Powerjack 9VDC power supply or similar. This power supply is capable of providing 1000 mA of power and is noise free. The more the capacity of the power supply, the less chance of noise and hum due to a power supply being pushed to its current capability limits.

All Celestial Effects pedals are hand built and individually hand tested in Hudson, MA by a company that cares about quality, durability and value. We back all our products with our 30 DAY NO QUESTIONS ASKED MONEY BACK GUARANTEE
Listen to tracks recorded with the Aries Beast Distortion>> 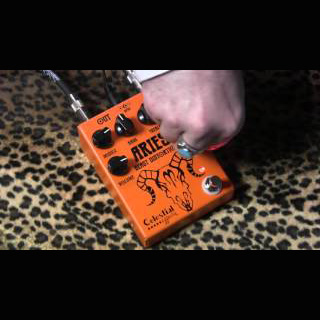 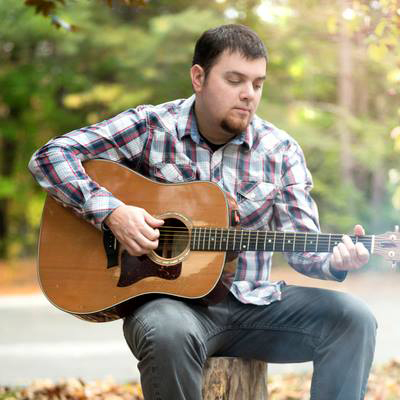 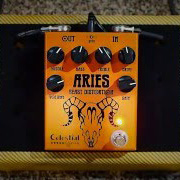 Aries Beast Distortion Demo
By:
Pedal of the Day 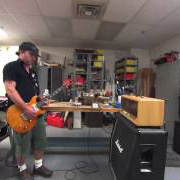 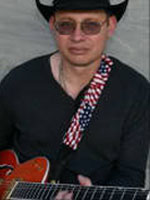 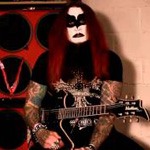 "DUDE!!! Aries is a beast!!! This is the best high gain pedal ever!!! I'm serious, man! I have tried lots of high gain pedals - MXR Fullbore, EHX Metal Muff, Bogner Uberschall, Boss, Digitech, etc, etc. and this thing blows them all away! Plus, there are other dirty sounds you can get out of it that aren't metal at all! I don't know how the hell you did this man, but it is fuc&*g sick! The second I kicked it on and realized what it was, I drop tuned the guitar and went nuts! And it's not muddy at all, either! The bigger the chord, the more badass the sound! I have never played through a high gain pedal this good, man. I'm thoroughly blown away. And I had high expectations, too! lol There comes a time in every mad genius' life when he exceeds even the highest of expectations. Thank you, bro!"
"Shawn Maginness - Shango"

"Dom!!! Oh my Lord! I feel like I have magic powers playing the Aries Beast! Holy Shit. It's like a drug. This is my new favorite! I've got my setting in beast mode.. I'll give you back the proto type, when you pry it from my COLD DEAD HANDS!."
"Randy Parsons - Parsons Guitars"

"Up until now, I thought that the Scorpio Super Boost was the only pedal that I couldn't live without. Then Dom comes up with this insanely amazing Aries pedal. One word: FLOORED. The Aries Beast Drive goes from being a subtle, touch sensitive light overdrive, to a huge powerhouse. From single coils on my '75 Strat, minis on my '64 Firebird, to the humbuckers on my '67 SG, this pedal simply loves them all. The only thing you need is your fingers and your guitar's volume pot... turning down cleans the Aries right up without losing the base tone quality the pedal gives. Add in the Scorpio Super Boost, and there's no better combination around. Dom is a mad genius and Celestial Effects is his laboratory!"
"John Kelley - Old Bottle Black"

Proudly Manufactured in the USA

Celestial Effects® is a new dimension of Thermalogic Corporation®